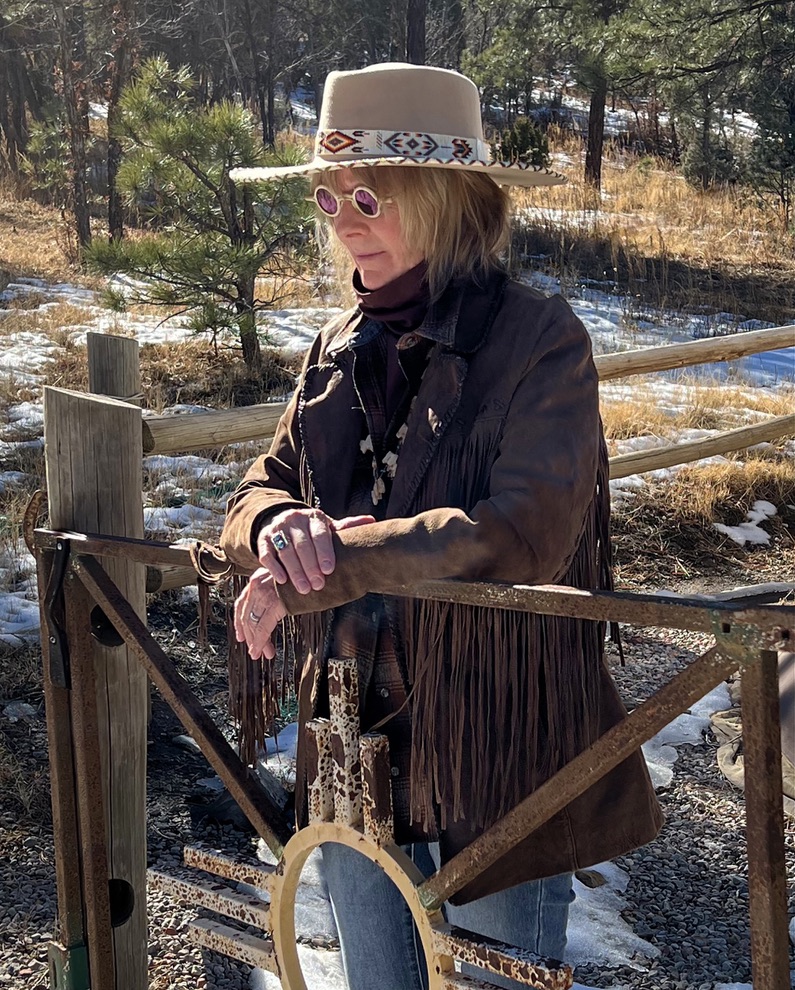 Shirley Laney Estes was born March 10, 1951 in Amarillo, Texas into a deeply spiritual family unit, where she was taught that talents were given by, and to be used for Creator. Both her visual artistic talent and a wisdom writing gift emerged at an early age. The parental and professional encouragement she received ensured that they both would be a continual expression of Shirley’s creativity.
While her family’s surrounding community was non-Native, Shirley’s introduction to Native American influence started as a child. As do many people from her generation, their family had a hushed history of Native American bloodlines that were not aggressively explored due to the prejudiced climate of their elder’s generations. Shirley’s maternal grandmother’s oldest brother was half Comanche and growing up, she and her siblings had a friendship that included frequent visits with the well-known Comanche Chief, Quanah Parker. Unfortunately, all the family has as mementos of those treasured times are the photos taken during their visits.

Thankfully, the prejudices encountered by her grandmother’s generation didn’t seep into Shirley’s immediate family, and she could have a continuing cultural connection that has been a significant influence in her life. Even with the lack of legitimacy in her known bloodline, Shirley’s father’s open fondness and friendships within Native American communities would find its way into her own soul. Shirley related that one of her earliest memories was as a toddler being fussy and her dad holding her while doing a native dance and chant to calm her down. It worked, and to this day the sound of chants, drumming and flute music carries her soul into a different dimension of peace and spiritual connection.

Prior to encountering a significant life-changing spiritual experience, Shirley spent a few years traveling and tasting the free spirited hippie lifestyle, along with participating in the prevailing time’s political protesting. Questioning had always been a trait, and in some cases a quagmire in her life, but it also allowed independent thinking to rule.
In 1974, Shirley married Jamie Estes, who is one fourth Choctaw. They began their lives together in Austin, Texas where Shirley’s career as an artist afforded her frequent opportunities to travel the Southwest and develop even deeper relationships within the various Native American tribes and communities. However, due to a debilitating disease, Shirley was forced to leave her lengthy profession as an artist. In 2007 they moved to the mountain village of Ruidoso, New Mexico, which neighbors the Mescalero Apache Reservation.

It was after that move when all the previous interwoven experiences with various Native American communities began to form a clearer vision of her quickly unfolding destiny. One of Shirley’s pivotal participations was her enrollment in the 2-Rivers Native American Training Center in Oklahoma founded and led by Yuchi leader, Dr. Negiel Bigpond. It was there that she was taught the Native American tradition of having a Creator-given spiritual name. During Shirley’s time at the training center she began seeking in prayer to know what her spiritual name was and the answer came so clearly that it startled her. She is known in celestial realms as Whispering Wind.
It is in acknowledgment and importance of knowing our true Creator-given identity that this book is authored as
“Shirley Estes aka Whispering Wind”.

In the past decade, Shirley personally, spiritually, and professionally became an integral part of several Native American nonprofits and communities. Some of her closest friends and trusted mentors are Native Americans who have allowed her heart to embrace what her history could not.
She is a time trusted voice that doesn’t desire to speak for Native American communities; instead to stand along- side honoring the great heritage of which she has been blessed to be a small part.